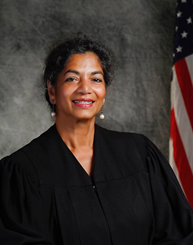 The Honorable Bernadette D’Souza was elected as the first Family Court Judge at Civil District Court for the Parish of Orleans on February 1, 2012. Judge D’Souza was previously a practicing attorney in public interest law for over 18 years, many of them as Managing Attorney of the Family Law and Domestic Violence Unit at Southeast Louisiana Legal Services. Judge D’Souza received her Juris Doctor degree from Tulane University School of Law in 1992. Upon graduation she dedicated her legal career to public interest law representing indigent clients in family law, housing, and domestic violence cases. She has spent over a decade promoting awareness to domestic violence issues by devoting time to educating and supervising law students from Tulane Law School and from around the country post-Katrina. Judge D’Souza served as adjunct professor at Tulane Law School, teaching a course on family law and domestic violence and instructing students through a clinical externship program. She also served as a guest lecturer at Loyola University College of Law on topics of domestic violence and poverty law. Judge D’Souza now serves on the National Council of Juvenile and Family Court Judges faculty of the National Judicial Institute on Domestic Violence.

Additionally, Judge D’Souza has served on many community boards. She served as President of the Greater New Orleans YWCA, Tulane University Women’s Association and the Auxiliary to the American Academy of Neurology. She served as Chairman of the Board of the WRBH - Radio for the Blind and as a board member (Secretary) of the Institute for Mental Hygiene. Judge D’Souza is a Mayoral appointee on the Board of Total Community Action. Upon election to the bench, Judge D’Souza became a member of the National Association of Women Judges (NAWJ) and was appointed as Co-Chair of the Domestic Violence Committee. She was elected to the Board of NAWJ as District Director and currently serves as its Secretary, Chair of the Personnel Committee and Co-chair of the Executive Director Search Committee. 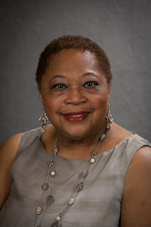 The Honorable Marcella A. Holland is a 1980 graduate of the University of Maryland - Baltimore County, where she majored in Political Science. She is also a 1983 graduate of the University of Maryland School of Law, which awarded her the Alumni Association Prize. While at Maryland Law School, she was active in many organizations, The Black Law Students Association (B.L.S.A.), serving as President, 1982-83; Chapter Justice, Phi Alpha Delta Law Fraternity; Representative, Student Bar Association; Articles Solicitation Editor, International Trade Law Journal, and Member, Moot Court Board, 1982 and 1983. Judge Holland also found time to participate in the Asper Internship Program, working for the Hon. Robert M. Bell during his tenure on the Circuit Court for Baltimore City.

Upon her admission to the Maryland State Bar Association in December 1983, Judge Holland was sworn in as Assistant State’s Attorney for Baltimore City and remained there for 13 years, the last nine years assigned to the Economic Crimes Unit before her appointment on September 18, 1997 as Associate Judge on the Circuit Court for Baltimore City. In March, 2001, she became Judge in Charge of the Domestic Docket. On November 8, 2003, Judge Holland began her appointment as Administrative Judge of the Circuit Court for Baltimore City, the first African American woman to hold that position in the state of Maryland. As Administrative Judge, she handled operations in three judicial buildings, managed a budget of approximately $15 million, staff of hundreds, 16 Masters, and 32 Associate Judges, in addition to media relations, governmental relations and planning for a new criminal courthouse. Judge Holland retired from this position as an active judge on November 30, 2013. She continues as a Senior Judge sitting occasionally in the Circuit Court for Baltimore City.

As a Judge, she was involved continuously in judicial committees and projects. Among her judicial activities, past and present: Co-Chair, Family Law Committee (2002-2003); Chair, Custody Subcommittee (2002-2005); Member, Legislative Committee (1999-2002); Judicial Council (2006-2009); Justice Matters Editorial Board (2002 -2013), and Chair of the Conference of Circuit Court Judges (2010-2012) giving her a seat on the Judicial Council and membership in the Judicial Cabinet. Judge Holland has lectured on various aspects of family law, case management, judicial reform and handling cases involving self-represented litigants in her home state, other states and the country of Morocco.

Judge Holland has authored two articles published in the Maryland State Bar Journal: Judicial Administration-A New Judge’s Perspective (July/August 1999), and The Emergence of Maryland’s African-American Women Attorneys (July/August 1995). She was the subject of the November/December 2016 MSBA Journal article Integration in a Post-Brown World: A Conversation with Judge Marcella A. Holland.

Throughout the years Judge Holland has constantly mentored young people by participating in various programs and one-on-one counseling. She is proud to have mentored 16 law clerks, two of whom are now judges, one in the state of Maryland, and one in New York. 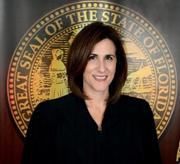 Honorable Lisa Walsh is a Circuit Court Judge, currently presiding in the Criminal Division of the 11th Judicial Circuit of Miami-Dade, Florida. She previously served in the Circuit’s Civil and Dependency divisions. From 2008 to 2011, Judge Walsh was a County Court Judge assigned to the Civil Division. Before becoming a judge, she practiced law for 16 years in trial and appellate state and federal courts, and also served as a Special Master for the City of Miami Beach.

Judge Walsh received an “AV Preeminent” rating from Martindale-Hubbell and was named in Super Lawyers and Florida Trend Legal Elite. Judge Walsh was the President of Miami-Dade Florida Association for Women Lawyers, Vice-Chair of a Florida Bar Grievance committee, a member of the Board of Directors for Legal Services of Greater Miami, where she was awarded for her commitment to equal justice, and a member of the Florida Bar Criminal Executive Council and the Appellate Rules Committee. Judge Walsh is the recipient of the 2018 Florida Bar Young Lawyer’s Division Outstanding Jurist Award, the 2018 MDTLA Judge Steven Levine Award, the 2017 Dade County Bar Association President’s Award as Outstanding Community Leader and the 2010 Judge Alan Schwartz Judicial Excellence award. She has received the “Devorah Judge” Award by the Miami Jewish Legal Society. She was named “Outstanding Woman in Government & Law” by the Miami-Dade Commission for Women, received the 2015 Mattie Belle Davis Award from Miami-Dade FAWL, and the 2015 Alumni Leadership Award by the University of Miami Law School. Judge Walsh has mentored for Educate Tomorrow and Big Brothers/ Big Sisters. She is an Adjunct Professor of appellate advocacy at St. Thomas Law School. She has been part of the faculty and administration of Florida’s Advanced Judicial College, Florida Judicial College, and the Florida Circuit Court Conference education committee since 2008. Judge Walsh was President of the National Association of Women Judges for the 2015-2016 year. She served on NAWJ’s Board of Directors for five years prior to assuming presidency.

Judge Walsh obtained her undergraduate degree from Northwestern University and her law degree from the University of Miami School of Law. She is married to attorney David Rosendorf and is the proud mother of two children.