NAWJ DISTRICT THREE ENERGIZES PENNSYLVANIA WITH OUTREACH TO INCARCERATED WOMEN, JUDICIAL COLLEAGUES AND EMERGING LEADERS INTERESTED IN THE LAW AND THE COURTS 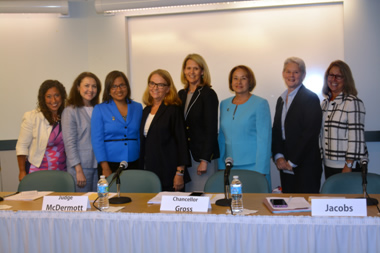 On June 23, 2017, members of NAWJ and the judges from the First Judicial District of Pennsylvania presented their 4th Success In & Out Conference at the Riverside Correction Facility for women. Five judges as well as 20 agency representatives were present provided an afternoon of information and helpful hints to the inmates.  Remarks from attendees, “this conference was very inspiring and greatly appreciated” and “I learned that the sky is the limit” show the impact and value of sharing information and support to those about to re-enter society. NAWJ member Judge Doris Pechkurow chaired this program.

On August 29, 2017, NAWJ members, along with members of the Women in the Profession Committee of the Philadelphia Bar Association and the Women’s Initiative of the First Judicial District of Pennsylvania, presented a Continuing Legal Education program entitled Branching Out. This program, which was based upon a program developed by District One,  included a panel discussion with  Justice Sallie Updike Mundy, Justice of the Pennsylvania Supreme Court and NAWJ,  Donna Bullock, Esquire, Pennsylvania House of Representatives, Sara Manzano-Diaz, Esq., Executive Deputy Attorney General, Public Protection Division, and Christine Jacobs, Founding Board Member of Represent PA. The panel discussion was moderated by Debra Gross, Esquire, Chair of the Philadelphia Bar Association, and the Honorable Barbara A. McDermott, District 3 Director. In attendance were NAWJ members, Judges Ann Butchart, Susan Peikes Gantman, one of the planners of the program, Stella Tsai, and Rainey Papademetriou.