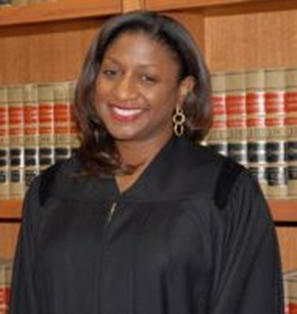 The Honorable Sheva M. Sims was elected National Association of Women Judges (NAWJ) District 6 Director serving the states of Louisiana, Mississippi, Alabama and Tennessee during the District Director Meetings held at NAWJ’s 39th Annual Conference in Atlanta, Georgia, October 11-15, 2017. The National Association of Women Judges (NAWJ) is the nation’s leading voice for women jurists. Judge Sims has been an active member of NAWJ since 2012.

Judge Sheva M. Sims, a life-long resident of Shreveport, Louisiana, was elected Judge on November 19, 2011, for Shreveport City Court, Division D. Prior to becoming a Judge, she was a practicing attorney for over 17 years handling civil and criminal litigation, small claims, and domestic cases.

Her education background includes a Bachelor of Science in Mathematics from Dillard University and a Juris Doctorate Degree from Southern University Law Center in Baton Rouge, LA.  After completing her undergraduate education, Judge Sims proceeded to work in education as a high school mathematics teacher in the New Orleans Public School system before attending law school.  Additionally, Judge Sims is a classically trained pianist, minister of music, and recording  artist who has shared her gift throughout the United States and abroad.  Passionate about her mathematics skills and desire to empower others, she continues to tutor individuals in mathematics as well.

Judge Sims said, “It was an honor to be sworn in as District Director of such an influential organization of dynamic and powerful women judges from throughout the United States. I am committed to the goals of the National Association of Women Judges, the promotion and advancement of women jurists and the insistence upon equal access to justice for all members of our society. Thank you to the more than 1,000 NAWJ members for electing me to this exciting, challenging and highly rewarding position.”

NAWJ is dedicated to preserving judicial independence, ensuring equal justice and access to the courts for women, minorities and other historically disfavored groups by providing judicial education on cutting-edge issues, and increasing the numbers and advancement of women judges at all levels to accurately reflect their full participation in a democratic society. Its members include federal, state, tribal, military and administrative law judges at both the appellate and trial levels from almost every state in the country.