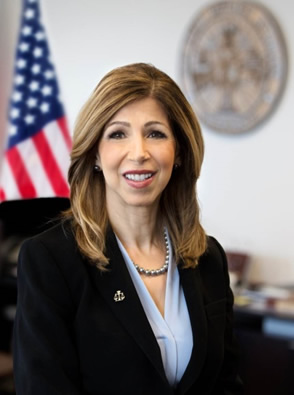 District Attorney Summer Stephan has devoted her life to protecting children and families and providing justice to the voiceless and most vulnerable. She is a national leader in the fight against sexual exploitation and human trafficking.

Summer Stephan has served as Deputy District Attorney in San Diego County for 27 years. During this time, she combined extensive courtroom experience with over 15 years of management and leadership experience. She rose through the ranks to appointments as Chief of the District Attorney’s North County Branch, and Chief of the Sex Crimes and Human Trafficking Division, a Special Victims Unit she pioneered.

In 2012, she was appointed Chief Deputy District Attorney. In 2017, she was appointed District Attorney.  Managing a professional staff of over 1,000 employees, Ms. Stephan leads the second largest District Attorney’s Office in California, serving San Diego County and its over three million residents spread throughout cities and communities from the U.S.-Mexico border to the Riverside County line. The District Attorney Stephan uses her nearly three decades of experience to set public safety priorities and collaborate with law enforcement and communities to maintain San Diego County as one of the safest urban regions in the United States. As a trial prosecutor, Ms. Stephan Summer tried more than 100 jury trials, including cases of complex homicides, sexually violent predators, child molestation, sexual assault, school shooting, and human trafficking-related cases.

She holds leadership positions in public safety on the national state and local level, including being selected as one of only two prosecutors in California to serve on Governor Schwarzenegger’s Task Force for High-Risk Sex Offenders and Sexually-Violent Predators. Ms. Stephen chaired the San Diego County Human Trafficking Advisory Council. She spearheaded the innovative “Know the Price” campaign, which focused on reducing sexual assaults of college students. She also led the award-winning “The Ugly Truth” Human Trafficking Campaign.

Ms. Stephan is a leader in advancing public safety through a smart, fair and equal criminal justice. She leverages innovations in crime prevention and restorative justice practices and believes in investing in and building healthy lives and communities instead of destructive and costly prison pipelines. She diverted youth offenders into positive programs while lowering recidivism and harm to communities; this dramatically lowered the incarceration rate for juvenile offenders by 48 percent. In addition, she focused on addressing the underlying causes of criminality for non-violent offenders such as mental health, substance abuse and addiction. She began the first Veterans Treatment Court in North County with Deputy District Attorney  George Loyd, a Marine Corps veteran.

Ms. Stephan is the recipient of numerous local, state and federal awards, including an FBI commendation for organized crime prosecution, the outstanding achievement award for the complex prosecution involving the sexual assault and murder of an elderly woman. She was named “Angel of Anti-Human Trafficking” and “Modern Day Abolitionist. She received the prestigious 2016 “Voices for Justice” award by the Interfaith Center for Worker Justice. This year, she received the Lifetime Legacy Award by Women of Influence and the Community Impact award by North County Lifeline.

Ms. Stephan is an instructor and trainer for the National District Attorneys Association Executive Management Course: “How to go from Boss to Leader.” She received her Bachelor of Arts degree from the University of California at Davis and her Juris Doctor from the University of the Pacific, McGeorge School of Law. She completed the “Driving Government Performance” Executive Education Course at the Harvard Kennedy School of Government.

Summer Stephan has long supported NAWJ years before becoming an official NAWJ member.  She has been participating as a mentor in the NAWJ’s Color of Justice and Mentor Jet programs for seven years.  She has also been an important part of the NAWJ’s “Success Inside & Out” Program in educating the incarcerated women on the issues of domestic violence prevention as well as the human trafficking prevention and awareness.  Recently, she joined NAWJ’s national committee on Human Trafficking.