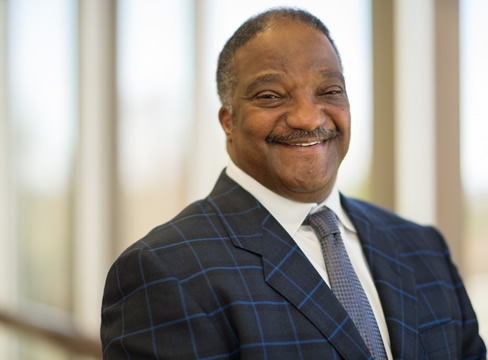 In October, 2017, William C.E. Robinson was honored NAWJ’s Mattie Belle Davis Award.  This award recognizes a member who has gone above and beyond his or her role as member and volunteers to help make a difference in the organization and furthered its mission, an individual dedicated to furthering and supporting women in the legal profession.

William C. E. Robinson has led GEICO’s support of NAWJ since 2014, when he joined as a Resource Board member. While a Resource Board member, his advocacy on behalf of NAWJ, and his commitment to provide resources towards NAWJ’s programs, has been unwavering.  Throughout his career, Mr. Robinson has worked to promote fairness and equality in the legal field for people of varying socioeconomic backgrounds, and he has invested his time and energy in a number of charitable organizations. Currently, he serves as a Commissioner on the District of Columbia Court of Appeals Equal Access to Justice Commission, and was a previous board member of the New York Urban League, in addition to several other non-profit organizations.

From January 2001 until December 2007, Mr. Robinson served as senior corporate counsel in the Office of General Counsel for GEICO. Since December 2007, Bill has been Corporate Secretary for GEICO Corporation and its various subsidiaries. In that role, Bill’s mission is two-fold: (1) provide corporate secretary services to the GEICO Companies and their Directors and Officers, including corporate governance oversight, records retention and maintenance, and various insurance department filings; and (2) provide the Human Resources Department with legal counsel relating to the legal compliance and other aspects of labor and employment issues confronted by the GEICO Companies.

Prior to joining GEICO, Mr. Robinson served as an Assistant District Attorney in Brooklyn, New York. He was a senior associate in a Washington, D.C. law firm, and he served as

managing attorney for the Metropolitan in Washington, D.C. Mr. Robinson was Staff Counsel for firm operations for Aetna and Travelers Insurance Companies. Bill has been a presenter to several labor and employment law firm associations and in-house corporate counsel associations in the areas of labor and employment, e-discovery and complex class actions. Bill is also co-author of Corporate Counsel Solutions, Employment Policies and Practices (published by LexisNexis in 2007).

Bill is a 1983 graduate of the Howard University School of Law.  He is a member of the New York, District of Columbia, Virginia and Maryland bars. Currently, he serves as a Commissioner on the District of Columbia Court of Appeals Equal Access to Justice Commission in addition to his role as a member of NAWJ’s Resource Board. Previously, he was a board member of the New York Urban League, as well as several non-profit organizations.