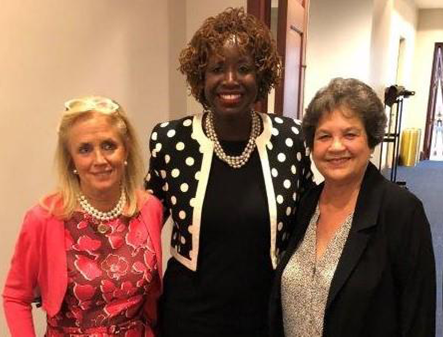 On July 18, 2018, NAWJ President, Honorable Tanya R. Kennedy, New York State Supreme Court, and Congressional Women’s Caucus Co-Chairs, Congresswomen Susan Brooks and Lois Frankel, hosted an audience of 50 persons, including congresswomen, judges, attorneys and staffers in a Meeting to ensure that women can thrive in healthy work environments, free of sexual harassment and intimidation. This collaborative effort served as a catalyst for the #WeToo in the Legal Workplace initiative.

“We have tried to find issues where we can work together, and one of those issues is sexual harassment,” said Congresswoman Lois Frankel.

The #WeToo in the Legal Workplace movement and this Meeting (co-sponsored by the Women’s Bar Association of the District of Columbia and the law firms of McGuireWoods and Morgan Lewis) will be the impetus for the creation of educational sessions, workshops, training programs, marketing and social media campaigns and defense funds to combat sexual harassment across the legal workplace. NAWJ President Hon. Tanya R. Kennedy stated that “NAWJ is extremely grateful to be the recipient of a $29,000 grant from the State Justice Institute, which will assist us in our efforts to create and implement educational and training programs and, therefore, empower women to thrive in healthy work environments, free from sexual harassment and discrimination.”

About NAWJ: Since its formation in 1979, NAWJ has inspired and led the American judiciary in achieving fairness and equality for vulnerable populations. NAWJ’s mission is to promote the judicial role of protecting the rights of individuals under the rule of law through strong, committed, diverse judicial leadership; fairness and equality in the courts; and equal access to justice.

For more information contact the National Association of Women Judges at nawj@nawj.org or call (202) 393-0222.