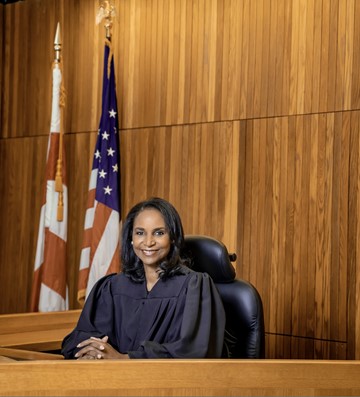 The Woman Lawyer of the Year Award recognizes a leader who has championed change in the profession by leading by example, advocating for justice, and promoting the advancement of women in the profession.

Chief Judge Josey-Herring serves as the chief administrative judicial officer for the Superior Court of the District of Columbia, and spokesperson for the Court. She is responsible for dividing the cases that come before the Court, which includes the Family Court, Probate and Tax, Domestic Violence, Criminal, and Civil Divisions. She also designates the Presiding and Deputy Presiding Judges of each Division and makes judicial assignments. As a member of the Joint Committee on Judicial Administration, she sets policy and procedure for the Court and oversees the budget. In addition to her tireless work on the bench, Chief Judge Josey-Herring has been an ardent supporter of others, an active and engaged member of the legal community, and a mentor to many. She is an active member of the Women’s Bar Association – among many other organizations in the community – and has mentored attorneys in the WBA’s Mentor program. She has been a panelist at WBA events, speaking about effective oral advocacy and how
gender and race impact the way women lawyers are perceived (including Where are the Black Women Lawyers in Leadership Positions? and Celebrating Representation: The First Black Woman on the U.S. Supreme Court).

Chief Judge Josey-Herring will be introduced by our 2021 Woman Lawyer of the Year, Grace Speights, Partner, Morgan, Lewis & Bockius LLP.

The 2022 WBA/WBA Foundation Annual Dinner and awards ceremony will take place at the National Building Museum on Thursday, May 19, 2022. The general reception begins at 6:30pm; dinner and program begin at 7:00pm.