This award recognizes outstanding leadership that promotes the vision, core values and mission of NAWJ. The 2013 recipient is Justice Joan K. Irion, Chair of NAWJ’s newly formed Judicial Elections Committee and chief creator of its ‘Informed Voters. Fair Judges‘ Project. Click here to learn more about the project. She has been a member since 2001, and began serving in officer roles starting in 2003 as Finance Chair. Justice Irion was appointed to the Fourth District Court of Appeal, Division One, in September 2003. Before her appointment to the Court of Appeal, Justice Irion served as a San Diego County Superior Court Judge. Read more on Justice Irion below, or click here to find her complete bio.

The Justice Vaino Spencer Leadership Award will be presented during the NAWJ Gala Banquet on Saturday, October 12th, the closing event of NAWJ’s 35th Annual Conference being held October 9-13, 2013 at The Ritz-Carlton, New Orleans. 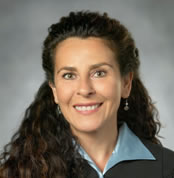 The Mattie Belle Davis Award honors an individual member who has gone above and beyond his or her role as member and volunteer to help make a difference in the organization, furthering its mission, and dedicated to supporting women in the legal profession as the Honorable Mattie Belle Davis did. The 2013 recipient is Judge Tamila Ebrahimi Ipema. Judge Ipema presented the first NAWJ Color of Justice and MentorJet program for the community of San Diego, California in 2011. This program is being continued on annual basis. Judge Tamila Ipema sits on the San Diego County Superior Court in California.

The Mattie Belle Davis Award will also be presented during the NAWJ Gala Banquet on Saturday, October 12 in The Ritz-Carlton. 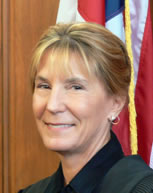 The year’s Excellence in Service Award will honor Justice Patricia Ann Hurst’s devotion to assuring that NAWJ’s finances are in order and compliant with tax, audit and regulatory requirements. Justice Hurst is chair of NAWJ's Audit and Compliance Committee and she has been a member of the National Association of Women Judges and the International Association of Women Judges since 2003. She served as Deputy District Director for District One for three years before joining the Executive Committee as Treasurer. Justice Hurst served as NAWJ's Treasurer for two terms, during 2008-09 and 2009-10. She regularly serves on one or more NAWJ committees each year, including Education, Membership Outreach and Retention, International Outreach, Women in Prison, and By-Laws committees. Together with the Audit Committee, Justice Hurst oversees the annual audit process and preparation of NAWJ's federal tax return; she regularly reports to NAWJ leadership, ensuring that NAWJ remains in compliance with recognized standards of good governance for non-profit corporations and with state and federal regulatory requirements. Justice Hurst also has been influential in developing significant NAWJ policies, ranging from document retention and whistleblowing to contract authority and investment policies.

The Norma Wickler Excellence in Service Award will be presented during the Keynote Luncheon on Thursday, October 10th, the opening day of NAWJ’s 35th Annual Conference.

View a list of all past award recipients here.

To learn more about the 2013 Annual Conference please visit the conference website here. To obtain tickets for this event, please contact Mary-Kathleen Todd (202) 393-0222 or mtodd@nawj.org.

**
About NAWJ
The National Association of Women Judges has been the leading voice for jurists, both men and women, for more than thirty-four years. The organization was founded in 1979 by two visionary women jurists, Justices Joan Dempsey Klein and Vaino Spencer, Los Angeles. NAWJ is dedicated to promoting the judicial role in protecting the rights of individuals under the rule of law through strong, committed, diverse judicial leadership; fairness and equality in the courts; and equal access to justice. Our goals include preserving judicial independence, ensuring equal justice and access to the courts for women, minorities, and other historically disfavored groups, and achieving fairness and equality for vulnerable populations. Throughout its history, NAWJ has been providing judicial education on cutting-edge issues; developing judicial leaders; increasing the number of women on the bench at all levels in order for the judiciary to more accurately reflect a democratic society; and improving the administration of justice to provide gender-fair decisions for both male and female litigants.