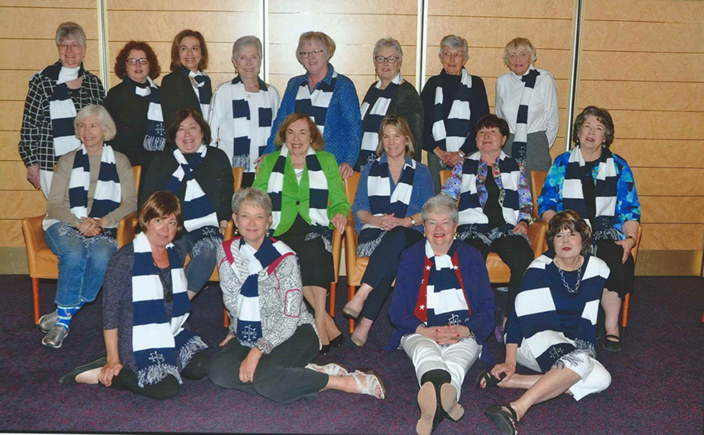 For the second time in the last eight years, NAWJ embarked on a Cruise Program, this time in New England, from Boston to Montreal. Twenty members and 14 spouses and guests from 11 states, California to Massachusetts, Washington State to Florida, set sail for seven days. This year’s cruise was organized by the NAWJ Retired and Senior Judges Committee, led by cruise coordinators Hon. Joan Churchill and Hon. Margaret Carter (both NAWJ Past Presidents.)

Cruise ship MS Maasdam sailed from Boston to Montreal May 20-27, 2017.  Three education sessions were presented: two of which focused on campus sexual assaults; and one, led by Judge Carter focused on judicial ethics, including information on ethical requirements for retired judges.  Education activity was combined with brunches, and was joined by local judges and other guests.  For the first time a joint program of NAWJ and the Canadian chapters of IAWJ was held in Montreal.

In Boston, before embarking on the cruise, NAWJ assembled a panel on campus assaults at the Boston law offices of Prince Lobel Tye, LLP.  Speakers included award winning documentary film maker Elizabeth Canner, who is preparing a documentary focusing on campus sexual assaults. She became embroiled in a declaratory judgment lawsuit brought under the New Hampshire Right to Know Law, to see and use public documents in the case of a student acquitted of rape, who had had his records “annulled.”  Ms. Canner was joined by attorney Rob Bertsche, a media lawyer with Prince Lobel, who represented her in the New Hampshire lawsuit.  Mr. Bertsche described the winning arguments he presented in the case to the New Hampshire Supreme Court, which issued a landmark First Amendment ruling in her favor last August (2016).   Local judges and guests attended, including NAWJ Past President Justice Nan Duffly (Massachusetts Supreme Court, Retired).

In Montreal, the group heard from Professor Shaheen Shariff, McGill University, with a different perspective.   She advocates combatting sexual violence on college campuses by enlisting the arts communities and media outlets to reexamine how they portray sexuality in their spheres of influence.  Professor Shariff heads up the National Multidisciplinary Project on Sexual Violence

Many thanks for the joint NAWJ-IAWH Canada meetings go to Judge Juanita Westmoreland, (retired from the Montreal Provincial Court).  Canada was celebrating its 150th year of confederation during NAWJ’s visit, and Quebec was celebrating its 375th anniversary.  The cruise docked in Nova Scotia on Victoria Day, and heard a 21 gun salute shot off at noon from the Citadel.

Plans are underway for another cruise in two years.  Initial regions considered include a cruise of the Great Lakes, a river cruise in Europe, and a cruise of the Chesapeake Bay.  Judge Margie Carter agreed to chair the subcommittee.   Judges Brenda Oldham and Patricia Hurst volunteered to serve on it.

For more information about NAWJ and its Retired and Senior Judges Committee’s work, contact Marie Komisar at mkomisar@nawj.org.