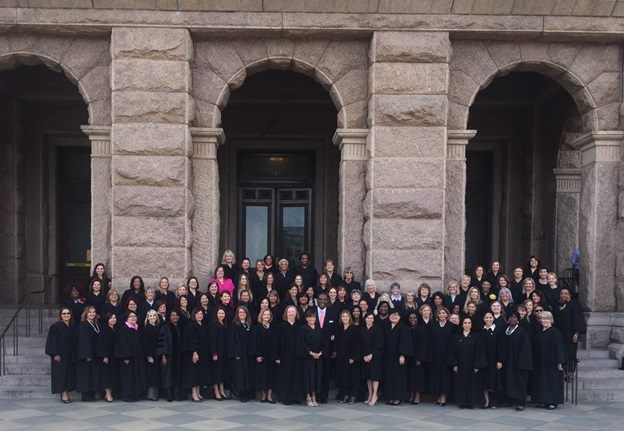 On April 4, 2017 women judges at all levels throughout the State of Texas were recognized at the State Capitol for their judicial achievements and dedication to public service. Over 150 female judges attended this historic event sponsored by Senator Royce West of Dallas, and Senator Joan Huffman of Houston.

Texas Senate Resolution No. 563 was read in the Senate Chamber proclaiming this day as “Texas Female Judges Day”. The first Texas Women Judges’ Day was held on April 13, 2015. Women judges traveled from throughout the state to attend this historic event.

In 1925, Texas sat the first all-female court in the nation, when Governor Pat Neff appointed three female attorneys to serve as Texas Supreme Court Justices on a particular case when all sitting justices recused themselves. In 1935, the first female, Sarah Hughes, was appointed to the 14th District Court in Dallas. Judge Hughes is better known as the federal judge who swore in Lyndon B. Johnson aboard Air Force One after the assassination of President John F. Kennedy. Today more than 1,100 women preside over courts throughout the state including six on the highest Texas Courts, Justices Eva Guzman, Sharon Keller, Debra Lehrmann, Barbara Hervey, Elsa Alcala, and Mary Lou Keel, some of whom attended this historic event.

Since its formation in 1979, NAWJ has served as a leading voice for jurists dedicated to promoting the judicial role in protecting the rights of individuals under the rule of law; engaging in civic education about the importance of a fair judiciary free from influence of special interest or political influence; providing a voice in significant matters that affect the administration of justice; ensuring equal justice and access to the courts for all, with a focus on women, minorities, and other historically disfavored groups and vulnerable populations; promoting the advancement of women at all levels of the judiciary; and providing judicial education on cutting-edge issues. NAWJ was founded over 38 years ago by two visionaries – Justice Joan Dempsey Klein and Justice Vaino Spencer – and 100 brave and intrepid women judges committed to forming an organization dedicated to these ideals.

NAWJ members welcomes women and men, trial and appellate, administrative, tribal and military judges, on federal, state and tribal courts at every level of the judiciary, throughout the country, and international tribunals. Members are judges, commissioners, attorneys, law clerks, law students, professors and legal experts of all kinds committed to our mission.