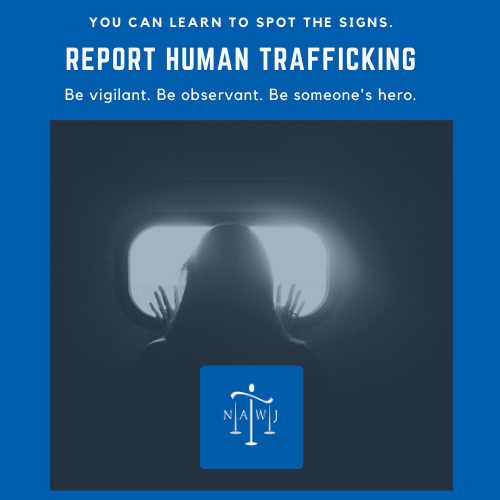 January is National Slavery and Human Trafficking Prevention Month.  "Human trafficking is a crime in which force, fraud or coercion is used to compel a person to perform labor, services or commercial sex. It affects all populations: adults, children, men, women, foreign nationals and U.S. citizens, and all economic classes…”. (see Department of Defense website)

Since its formation in 1979, NAWJ has inspired and led the American judiciary in achieving fairness and equality for vulnerable populations and, in recognition of the particularly egregious issues associated with Human Trafficking, in 2010 NAWJ adopted human trafficking as their worldwide priority issue seeking to raise awareness and do its part to address these horrific crimes, including the establishment of a Human Traffic Committee. (NAWJ-HTC)

For more information on the work of this important committee click here.