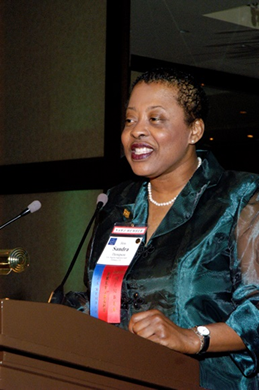 NAWJ mourns the loss of our Past President, The Honorable Sandra Ann Thompson (2004-2005) who served as a Judge on the Los Angeles County Superior Court.

During her presidency, Judge Thompson raised NAWJ’s profile and successfully increased membership and our financial position through her extensive travel throughout the country to implement various regional events and collaborations with other bar and judicial associations. She initiated a scholarship program to support the education of young women dedicated to NAWJ’s mission.  She was particularly proud of a Color of Justice Program held in Jackson, Mississippi which NAWJ sponsored with The Links, Incorporated.  Judge Thompson’s remarks regarding the independence of the judiciary were featured in The New York Times and Courts Today. Her comments on sentencing alternatives were also featured in Courts Today. Her substantive presentations before the Commission on the Status of Women, The Commission to Evaluate the Model Code of Judicial Conduct, and the Commission on Minority and Ethnic Bias of the American Bar Association during her tenure also enhanced NAWJ’s status and good will throughout the legal community.

Prior to becoming a Judge of the Los Angeles County Superior Court, Judge Thompson served as a judge for the South Bay Municipal Court from 1984 to 2000.  She also worked as a Deputy City Attorney in Inglewood and served as Deputy District Attorney for the Los Angeles County District Attorney’s Office.  In 2005, Judge Thompson was recipient of the Joan Dempsey Klein Distinguished Jurist Award from the California Women Lawyers. Judge Thompson is a Founding Member of the Association of African American California Judicial Offices, Inc. (AAACJO).

Judge Thompson wrote in her President’s Report to the Board of Directors at the 2005 Annual Conference in Houston, Texas:

We are in a much better financial position than we were at this time last year.  We had been projecting a substantial shortfall and now we are in a position to proceed with our programs and goals.  I am proud of our regional participation, educational seminars, fiscal responsibility and the collegiality present during my tenure.  It has been a privilege to serve as the President of the National Association of Women Judges; I will always look on this year as one of the most rewarding of my life.

About NAWJ: Since its formation in 1979, NAWJ has inspired and led the American judiciary in achieving fairness and equality for vulnerable populations. NAWJ’s mission is to promote the judicial role of protecting the rights of individuals under the rule of law through strong, committed, diverse judicial leadership; fairness and equality in the courts; and equal access to justice.

For more information contact the National Association of Women Judges at nawj@nawj.org or call (202) 393-0222.