This summer, the partnership will conduct and record a training webinar for presenters interested in delivering a public education program on judicial independence and the importance of fair and impartial courts.  NAWJ Judicial Independence Committee Co-Chair, Hon. Robin Hudson (North Carolina Supreme Court), NAWJ-IVP National Education Chair Annette Boyd Pitts, and ACTL Fellows Virginia Nelson and Kathleen Trafford are serving as the partnership representatives for the initiative.  They are in the process of refining the schedule and formats to reflect the fact that the COVID -19 pandemic will impact how such presentations may be offered in different states in the short term and possibly into 2021.  Presentation formats likely will include remote and recorded presentations as options when face-to-face presentations are not feasible.  Target audiences include adults in colleges, universities, civic organizations, and other nonpartisan forums.  The pilot partnership will serve as a model for expansion throughout the country.

For additional details or to sign up as a NAWJ member presenter please contact Annette Pitts, National Education Chair for the NAWJ Informed Voters Project.

The American College of Trial Lawyers is an invitation only fellowship of trial lawyers of diverse backgrounds from the United States and Canada.  The College maintains and seeks to improve the standards of trial practice, professionalism, ethics, and the administration of justice through education and public statements on important legal issues relating to its mission.  The College strongly supports the independence of the judiciary, trial by jury, respect for the rule of law, access to justice, and fair and just representation of all parties to legal proceedings.

In 2019, the College published an update to a 2006 paper, “The Need to Promote and Defend Fair and Impartial Courts.”  In the publication, the College looks back at the past decade and concludes that threats to fair and impartial courts in the United States increased in volume – both number and pitch – and at the federal and state levels over the past decade.  As a result, the 2018-2019 ACTL Task Force on Judicial Independence made multiple recommendations for action to the College.

Since 2010, special interest groups have increasingly spent more time and money to influence judicial elections, decisions, and selection processes.  In response, NAWJ launched its Informed Voters, Fair Judges Project (“IVP”) as a nonpartisan, adult, civic education and outreach initiative.  The project aims to educate the public about the constitutional role of the judicial branch and to protect our courts from external pressures and influences.  IVP’s mission is to increase public understanding of the American judicial system, to inform voters that politics and special interests and influences have no place in the courts and to give voters the tools they need to ensure judges are appointed and elected on the basis of their judicial qualifications, character, temperament, and ability.  The Judicial Independence Committee of the National Association of Women Judges implements the initiative nationally. Leadership of the JI Committee includes co-chairs the Honorable Debra Stephens, Chief Justice, Washington State Supreme Court; and the Honorable Robin Hudson, Justice, North Carolina Supreme Court. Informed Voters Project leadership includes co-chairs Chief Justice Tani Cantil-Sakauye, California Supreme Court; and Florida attorney Linda Leali.  Annette Boyd Pitts serves as the IVP National Education Chair. NAWJ members and leaders play critical roles in committee efforts throughout the year.  Justice Joan Irion of California conceptualized, developed and was the first chair of the organization's Informed Voters Fair Judges non-partisan education project.  The Project has produced an Emmy-Award Winning Public Service Announcement, "Fair and Free," featuring United States Supreme Court Justice Sandra Day O'Connor (Retired). Justice Irion accepted the Emmy Award on behalf of the National Association of Women Judges.

To learn more about the NAWJ and the Informed Voters Project, contact Annette Pitts at annettebpitts@gmail.com. 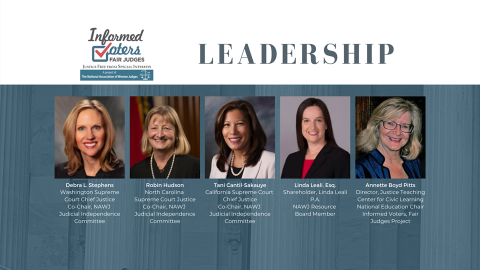