IVP REPORT FROM THE HIGH PLAINS

IVP REPORT FROM THE HIGH PLAINS 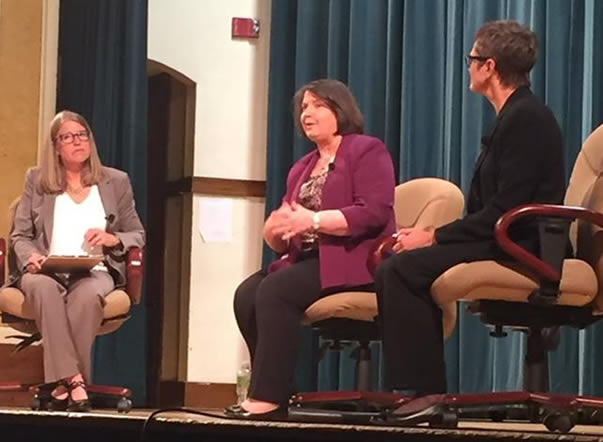 The National Association of Women Judges' Informed Voter Project provided critically important help in Kansas' 2016 retention elections, where all of the 11 appellate judges on the ballot were retained by voters on November 8.

Kansas had been one of the eight original pilot states for the Project. It was an early player, one of the first states to form an implementation committee, which included judges, lawyers, and interested laypersons from both urban and rural areas. Members of the committee advised and assisted Project leaders in developing materials; then they deployed the materials as appropriate for the Kansas landscape and political climate. These efforts included dozens of presentations to audiences of all types.

"There is no question in my mind that IVP worked exactly as it was intended," said Justice Carol A. Beier, one of the justices on the 2016 ballot. "It helped to lay a reliable, respected, nonpartisan foundation for the educational component of this year's effort supporting retention of Kansas judges and justices."

Justice Marla J. Luckert, another of the justices on the ballot, agreed: "The members of our Court were able to build on IVP for the last 18 months, as we talked to Kansans about the importance of fair and impartial courts dedicated to preserving justice for all citizens. We were able to select from among the terrific NAWJ handouts and Power Point slides and other materials to assist us in reminding our listeners why the separation of powers is so vital to our freedom."

Judge Karen Arnold-Burger of the Court of Appeals, who also was retained, personally made more than 50 presentations incorporating IVP concepts and disseminating its materials, including cards developed specifically for distribution to Kansas voters. She also developed web-based training for other speakers. "The Justice Sandra Day O'Connor video, "Fair and Free," was especially compelling for many of my audiences." Judge Arnold-Burger said. "It drove home the point that all Kansans, no matter their background or their influence or lack of it, can expect to be heard and treated fairly in our courtrooms."

The IVP Committee, including Chair Mary F. Birch of Lathrop & Gage, and media expert Sarah Fizell, were able to work productively with the League of Women Voters and the Kansas Bar Association and many other groups and individuals involved in the coalition supporting retention.

This coalition participation was vital, according to F. James Robinson of Hite, Fanning & Honeyman, who led the coalition's campaign. "IVP helped to set the stage for the education and political success that followed," Robinson said, "and all of us in Kansas are grateful for NAWJ's support. We believe what happened here can be a model for other states facing down well-funded campaigns to politicize their bench."