FROM TINY PENCILS TO LAPTOPS 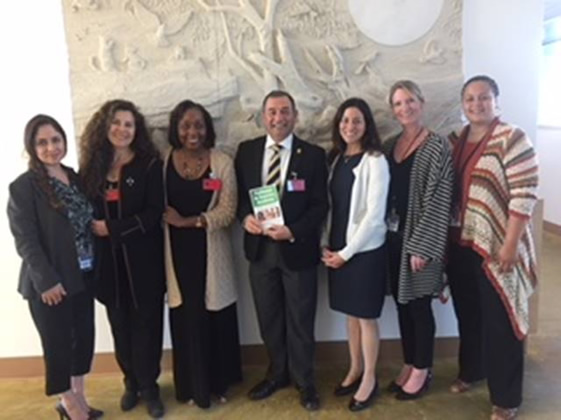 Watching the twenty-four inmates sitting in their rows awaiting recognition for their remarkable college credit achievements, many words floated around the room-  gratitude, inspiration, and hope.  The mood was ebullient, and in the audience sat the President of Grossmont College, the Vice President of Academic Affairs, a dean, professors and the administrative staff that made sure all of the paperwork was in order to start the inmates on their way to being college students.  Along the back wall stood the women directors and deputies from Las Colinas Detention Facility who think outside of the box and took a chance with this new program.  Judge Tamila Ipema and I sat along the side, and we were beaming, from the minute we entered the room until we left; we could not have smiled any wider.

Today was about recognizing the women who had finished another segment of college courses while serving their sentences.  Five of the women by week’s end, would have reached the extraordinary achievement of earning 19 credits, more than many students outside of jail earn, in the year since the program began.  A few of the women had perfect academic records, 4.0 grade point averages.  Of this group, one woman in particular stands out.  She entered Las Colinas as a pregnant high school drop-out who only spoke Spanish.  In one year’s time, she mastered English, earned 19 credits and had a 4.0.  It is safe to say that no one in this young woman’s life would have ever thought this was possible.  Hers was a chosen life of crime, drug use and taking what she could get.  When this opportunity was presented to the jail population, she ignored all of the usual feelings of not being worthy, and signed up.  Now she holds her head up, she looks others in the eye, and has dreams of a four-year degree and a teaching position.

Dr. Pearl Lopez came to the front of the room in honor of the women and simply said, “I just want to stare at you for a minute.”  Hers was an introspective writing course.  In her class, the hardest kind of work was done, the inner work that forces you to examine your own life.  She is one of many professors from Grossmont College that agreed to come to the jail and teach women who wore the label of convicted felons, some sentenced to upwards of 6 years at this facility.  Now there is a waiting list with professors lining up to have a chance to work with this population that comprises women who had not sat in a classroom for years, some for decades.   One inmate addressed the group, and laughingly admitted she was known as the “cry baby,” as a silent stream of tears rolled down her cheeks.  Erica remarked about how far she had come from her life of crime that defined her for many years.  In reference to Dr. Lopez’ class, she said “I was made to dive so deep that I nearly drowned.”  Gratitude spilled out, and with it, hope in its rawest form.  A realization that anything is possible and that she was definitely headed in a better direction.

Another professor quoted the words of Bob Marley and Redemption Song and reminded the women that they have this unique opportunity, through education, to re-define who they are and who they will be.  Professor Julio Soto began as a community college student at Grossmont years ago and worked his way through school and through jobs on campus from administrative tasks to now being a professor.  His connection to these inmates was unmistakable and they honored him with loud cheers and clapping that hung on past the usual ten to twenty seconds.  He commented on the courage that each woman had shown in his Sociology class and that hope was “being built because of how hard you have worked.”

President Nabil Abu-Ghazaleh and Dr. Katrina VanderWoude were a significant part of the moving force behind making this program a reality.  Not only do they share a wall at work, they share a vision.  Dr. VanderWoude recited the college’s motto-  “Changing lives through education” and told about how they realized that teaching sentenced inmates at a jail would put that motto to a true test.  With the full support of President Abu-Ghazaleh, they worked closely with the jail’s re-entry supervisors and counselors and NAWJ members who were constantly pushing the envelope on what else could be done to help the women upon release.  With the goal of reduction in recidivism at the helm for the jail personnel and the judges from the justice system, it was easy to get them both on board.  The real work and commitment would have to come from the college.   And come it did, in droves with a current waiting list for professors hoping for a chance to work with this special group of women.  President Abu- Ghazaleh told the women that they were the glue that held the three factions-  law enforcement, education and the criminal justice system, together.  He told them that each one of them represented a stitch that is helping to repair the torn fabric of society, and that he honored them for their hard work and willingness to do their part.  In ending, he told them without their performance and success, the experiment would have come to a short conclusion.  Because of these women, the door is now open for others behind them for many years into the future.  What started out as tiny pencils on paper with no hard cover text books or staples allowed, has evolved into laptop computers- their arrival is expected soon and with them, an even higher level of learning. 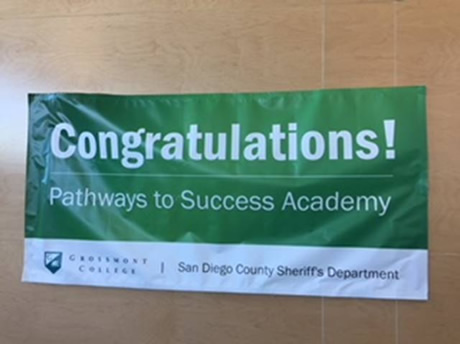 Counselor Ceballos spoke words that made the women sit a little straighter- she told them that in life they have had a lot of labels, and many of them were not flattering.  Now, she said, you have the label of “student“ and no one can ever take that away from you.  After the ceremony, cake was served, a real treat in a facility where special desserts (baked and decorated by the culinary students at the men’s jail) are rare.  But then, again, so are these women.  The time has come for NAWJ members all over our country, in each and every state, to take up this idea and run with it.  It is possible, the women inmates will prove that time and time again.