FOR FEMALE INMATES IN NEW YORK CITY, PRISON IS A CROWDED, WINDOWLESS ROOM 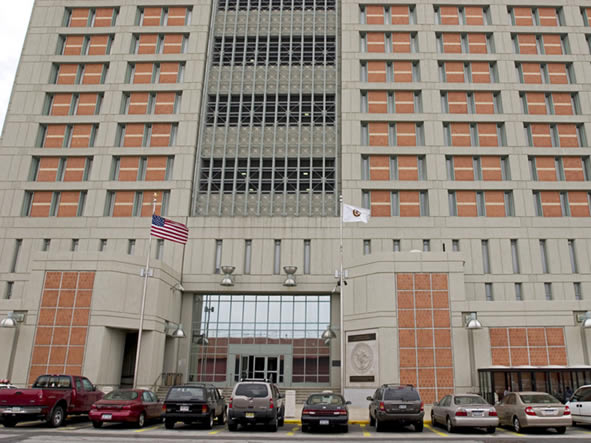 More than a hundred female federal inmates, sentenced to long-term prison, have instead been held for years in two windowless rooms in a detention center in Brooklyn.

Conditions for the women have been found to violate international standards for the treatment of prisoners.

The problem in Brooklyn actually started in Connecticut, in what was the only federal prison for women in the Northeast. But the prison population across the country increased nearly 10-fold over the last 40 years, and men's prisons were overflowing. In December 2012, the Bureau of Prisons decided to move the women out of the Danbury prison and move men in.

The women were sent to the Metropolitan Detention Center, a jail in Brooklyn, until a new prison could be built on the site. The move was supposed to last 18 months. But nearly three years later, many are still stuck at MDC.

"We felt like we were animals that was taken to a pound and then that was it, they just closed the door and left us," says Ramona Brant, 53. Brant was granted clemency by President Obama in February. Before that, she spent the first 19 years of a life sentence at Danbury for a nonviolent drug charge. She says it was OK — there were activities, jobs, access to the outdoors — until March 2014, when she and the others were moved to the jail.

"Little by little they started filling it up and before we knew it, it was 120 women in this one room, and it was unbearable," she says.

A report released by the National Association of Women Judges finds conditions for the women at MDC violate both the American Bar Association's standards and the United Nations Standard Minimum Rules for Treatment of Prisoners.

The judges said the women had no access to the outdoors and inmates complained of being unable to get appropriate medical care, especially gynecological care. At least one inmate was visibly pregnant. The warden told the judges the Bureau of Prisons couldn't find doctors willing to work there.

David Patton, executive director of the Federal Defenders of New York, the public defenders' service for people who can't afford a private attorney, says his organization has had issues with the facility for years.

"There have been maggots in the food, urine-stained mattresses, dryers that vent into the sleeping area, a lack of fresh air and recreation," Patton says.

Unlike Danbury, which is a long-term prison, MDC is a detention center, just meant to hold people while they await trial.

"Jails, like the MDCs, tend not to have the programming, the level of medical and mental health treatment and a whole range of other services that you find in a prison," says David Fathi, director of the ACLU's National Prison Project.

He points out federal courts have ruled that prisoners have the right to outdoor exercise.

"The Supreme Court has made quite clear that prison conditions that might be tolerable for a few weeks or even a couple of months can ripen into unconstitutionality if they go on for a sufficiently long amount of time," Fathi says.

Sister Megan Rice, 86, spent 13 months at MDC during her sentence for vandalizing a nuclear facility in Tennessee. She says without appropriate support, the women are denied any real shot at rehabilitation.

"They're meant to be given opportunities to grow, to leave the prison as a more healed person," she says.

Neither the Bureau of Prisons nor the Justice Department, which oversees it, would talk on record about the conditions or the delay in returning the women to Connecticut.