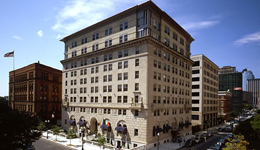 Over 400 people attended the National Association of Women Judges (NAWJ) Northeastern Leadership Conference and Midyear Meeting weekend of events April 11 - 13, 2008 in Boston. Highlighting the Conference was Keynote Luncheon Speaker Jeffrey Toobin, CNN commentator and New Yorker staff writer, delivering a captivating précis of his current bestseller, The Nine: Inside the Secret World of the Supreme Court. The luncheon took place in the luxurious Cityview Room in the World Trade Center, overlooking a magnificent view of the Boston harbor.

Following Mr. Toobin’s remarks, a panel on the always hot topic of court-press, press-court relations entitled "The First Amendment and the High Profile Case" and moderated by the engaging NewsCenter 5 TV reporter, Amalia Barreda, featured the informed and provocative views of Massachusetts Attorney General Martha Coakley, the Hon. Gordon Doerfer, President-Elect of the American Judicature Society; U.S. District Judge Nancy Gertner, Joan Kenney, Public Information Officer of the Massachusetts Supreme Judicial Court; and Joan Lukey, a nationally prominent litigator and partner at WilmerHale. Judging by the range of views of the panelist, and questions and remarks by audience members and press representative, moderator Barreda alike, while recognition was paid to the importance of the role of judges and the independence of the courts and judicial processes, most everyone recognized the need for mature communications developments between the press and the courts that will improve not only knowledge of the facts of the case, but also help the public understand what issues the courts set out to address and did or could not with judgments on the case.

Presiding over the conference, Massachusetts Court of Appeals Justice Fernande Duffly, NAWJ’s first Asian American President “was delighted to have presented this wonderful conference here in this beautiful and historically rich City of Boston,” “and to have welcomed judges from across the Northeast, as well as our National Board of Directors and the distinguished Co-Chairs of our Friends Committee, Lena Goldberg and Alice Richmond who reached out and brought in an extraordinarily broad cross-section of our legal community with support of all kinds."

Honoring the first woman to serve on the Massachusetts Supreme Judicial Court, Justice (Retired) Ruth Abrams in the setting of the beautiful Social Law Library in the Adams Courthouse, President Duffly proudly awarded a Certificate of Ruth I. Abrams Scholarship to Suffolk University Law School student, Matilda Ingabire Mutanguha, in recognition of her meaningful work done to advance the understanding of challenges faced by women lawyers and jurists in the legal profession.

The Ruth I. Abrams Endowment for Women and the Law of the Massachusetts Supreme Judicial Court Historical Society, an educational trust managed by the Social Law Library presented Ms. Mutanguha with a check of five thousand dollars.

Conference attendees also took advantage of the opportunity for evening social engagement at the historic Parkman House on Beacon Hill, and a breakfast toast to Massachusetts Chief Justice Margaret Marshall at Jurys Hotel.

The conference agenda can be downloaded here.

We would like to thank the sponsors of the 2008 NAWJ Midyear and New England Leadership Conference!