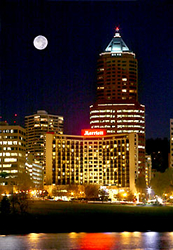 The conference was overwhelmingly successful due to the tremendous hard work of the Conference Chairs, Judges Ellen Rosenblum, Julie Frantz, Jill Tanner and Mary Deits, Friends Committee Chair Lindsey H. Hughes, Deans Elizabeth Stephens and Elizabeth Davis, and Heather Weigler of the Oregon Department of Justice. We salute them for their outstanding efforts.

Judges, attorneys, academics and many others associated within the legal community were on hand to participate and gather new information in over 30 programs over the course of the Conference. Judges from Egypt shared an amusingly infectious, yet striking, portrayal of their personal experiences with law in their own country and described the nature of the legal and judicial system there. Local attorneys from OWLS, the Oregon Women Lawyers Society, generously supported Conference activities throughout the yearlong planning process and Conference weekend collecting books for donation to the local Coffee Creek Women’s Correctional Institution library.

The Conference’s first keynote speaker, Donzaleigh Abernathy, led audiences in a trip through the Civil Rights movement as she movingly described life growing up with her father, the Reverend Ralph Abernathy, who co-founded the Southern Christian Leadership Conference with Reverend Dr. Martin Luther King, Jr. Not to be outdone with impressing attendees, she was followed the next day by Linda Greenhouse whose account of her experiences covering the court for The New York Times was complemented by legal scholar Stanford Professor Pamela Karlan’s analysis and commentary. In keeping with tradition, NAWJ’s Annual Awards Banquets capped the Conference which included true crime author Ann Rule’s window into a few of America’s most seemly criminals.

A significant number of NAWJ Resource Board members were in attendance and expressed a continued commitment to assist in the fulfillment of our mission. NAWJ’s gratitude to these Resource Board Members is boundless. Two firms, Orrick Sutcliffe and Herrington and WilmerHale, had Resource Board Members on hand to receive recognition with special NAWJ Awards for extraordinary service to NAWJ during the year.

The 2008 NAWJ 30th Annual Conference Chairs are listed below. This list can additionally be downloaded in Microsoft Word format.

We would like to thank the sponsors of the 2008 NAWJ 30th Annual Conference!

Rates do not include tax. Quotes are for single or double occupancy.

Reservations
To reserve a room, call 1-800-228-9290 and state that you are with the National Association of Women Judges Conference.

Rooms are subject to availability. Book your hotel as soon as possible. Rooms at the group rate are very limited!

Deadlines for reservations at the NAWJ group rate: September 26, 2008.

Registration Fees
NAWJ Member registration fee includes all educational sessions, receptions, meals, transportation to events listed in the program and use of the hospitality suite:

Click here to register online and pay by MasterCard, VISA or AMEX.

Cancellation Policy
If notice of cancellation is received after October 1, 2008, the registration fee, less a $50 processing fee, is refundable. Cancellations received within 3 days of the conference are refundable less a $100 fee.

(In order of appearance in Schedule. See Program Agenda for detail)

Movie screening of “Holly”
This captivating and emotional film is sponsored by LexisNexis® in its effort to help combat and raise awareness of the epic problem of child prostitution and to promote the Rule of Law.

Tour the Historic Pioneer Courthouse
Ninth Circuit Court of Appeals judges will host tours of the beautifully restored Pioneer Courthouse, a National Historic Landmark and one of the oldest standing Federal Building in the Pacific Northwest and the second oldest standing Federal Building West of the Mississippi. The building is one of the four primary locations where the U.S. Court of Appeals for the Ninth Circuit hears oral argument.

NAWJ Awards Banquet
In this annual celebration of NAWJ achievements come listen to crime novelist Ann Rule, learn this year’s awardees and bring a book or two to the dinner for donation to the Coffee Creek Women's Correctional Institution library.

WHAT TO DO IN AND AROUND PORTLAND, OREGON

GETTING AROUND PORTLAND, OREGON

Ellen Rosenblum has provided Ellen's Guide to assist you with getting around Portland. The guide also includes some ideas for short excursions and some shopping and dining tips.