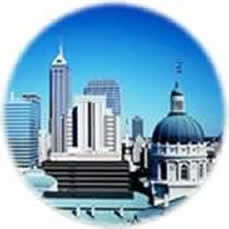 The 26th Annual Conference in Indianapolis, Indiana was a huge success. The weekend was chalk full of first class programming, outstanding speakers and wonderful social gatherings. Conference Chair, Judge Maggie Robb, and her hard-working committee put an exceptional amount of time and effort into making this year's Conference a pleasant and beneficial experience for all in attendance. Thank you to Judge Robb, the 2004 Conference Committee and to everyone who attended for making this Conference such a great success!

NAWJ was honored to be addressed by Dr. Kathy Reichs, a forensic anthropologist and frequent expert witness, and Dr. Will Miller, a stand well-known stand-up comedian. Each of these speakers did an excellent job and truly enriched the Conference.

Also, four people earned awards from the Conference. Retired Minnesota Supreme Court Justice Rosalie Wahl, a founding member, was named the Joan Dempsey Klein Honoree of the Year for her longstanding support of NAWJ. New York attorney Conrad L. Klein was named as the 2004 Florence K. Murray awardee. Mr. Klein is the husband of NAWJ Founding Mother, the Hon. Joan Dempsey Klein, and has been a supporter of NAWJ since it was established in 1979. Milwaukee Circuit Court Judge Maxine White was named the 2004 recipient of the Mattie Belle Davis Award for demonstrating growing leadership with the NAWJ. Finally, Chief Justice Shepard earned the Norma J. Winkler Excellence in Service Award. The award is given to an NAWJ member who has performed above and beyond the call of duty in support of NAWJ. The Chief Randall T. Justice received the award in recognition of his overall belief in NAWJ’s mission and his support for the 2004 conference.

Photos from the conference can be found at Future-Pros.com. To access the photos, please enter the following password: NAWJ2004

After such a superb conference in Indianapolis, we are looking forward to the 27th annual conference in 2005 set to be in Houston, Texas!